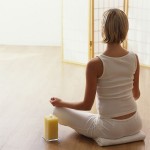 Are you a martyr to stress? Do you suffer endless colds and illness but soldier on because you’re just too busy to give in and take a break? You’ve got the kids to see to, deadlines to meet, dinner to make and – let’s face it – you rarely sit down before 10pm, by which point you are simply too exhausted for partake in anything more exacting than a few grunts of conversation! This relentless pressure brings with it the greatest threat of all to your health and well-being – stress!

More and more people in the western world are seeking relief from that strain by turning to meditation. Simply taking ten minutes a day could help you switch off from the problems that beset you, allowing a clearer perspective to emerge. Through time you will find the equilibrium your body craves, but most importantly of all, your health,well-being and vitality will certainly improve.

In theory, meditation, practised regularly, can bring about total relaxation. All the mental processes slow down, the ‘roof-top’ chatter ceases and an inner peace is achieved. During meditation the mind is released from any pre occupations and is focused only on the ‘here and now’ so that the meditator is neither troubled by memories from the past nor distracted by plans in the future.

There are many types of meditation but the three principal ones are:

1. Transcendental meditation (TM) which is practised by many to alleviate stress. It requires you to spend 20 minutes twice a day sitting comfortably with eyes closed while silently repeating a special word or mantra. TM was developed in 1960 by the Maharishi Mahesh Yogi, guru to the Beatles and was lovingly embraced by hippies everywhere in the 1970s;

2. Buddhist meditation, on the other hand, has been practised for over 2,500 years in Asia in both monasteric and secular settings. Unlike TM, Buddhist meditation does not usually involve a mantra. Fundamentally it focuses on the importance of breathing and positive feelings for people around you – yes – even those you don’t like! Following the Buddhist philosophy you seek to change a state of mind that may be hindering you from achieving peace and calm such as hate, doubt, desire, jealousy, laziness or restlessness.

3. The third most popularised form of meditation is Mantra which is very similar to Transcendental. This technique allows your attention to rest on a simple sound to which you attach no attitude or emotion.

Meditation is effective for reducing anxiety and there are claims that it can alleviate the symptoms of disorders that are stress related such as migraine, insomnia, depression, irritable bowel syndrome and premenstrual tension. There are even instances where regular meditation has played its part in reducing dependency on drugs and alcohol. Advocates of the ancient art are also report an increase in self-confidence and a greater sense of self.

It is claimed by some practitioners that during meditation people achieve a deep level of rest. This deep rest leads to the production of alpha brainwaves and changes in muscle tone and skin resistance. You may experience some progress, particularly an improvement in sleeping and a reduction in both anxiety and cravings if you are a particularly heavy smoker or drinker. The benefits however are cumulative – the more you do it, the greater they are. There is some evidence to suggest that it may boost the neurotransmitter serotonin in the same way as an antidepressant drug but without the side-effects.

The benefits of meditation

It can be difficult to still the mind if you are new to meditation so it is best to find a teacher who can provide a group situation until you become familiar with what you aiming to achieve. If however, you do not have the time or money to invest in a course, there are many meditations you can try for yourself.

Even the most basic form of meditation can bring benefits. In fact the simplest forms are probably the best. A regular daily practice of just five or ten minutes will be much more valuable than a longer period squeezed in once every so often. Make it a ritual – at the same time every day where possible. This way your body and mind will soon become accustomed to the practice and you will begin to find it easier to slip into your desired state.

Perhaps you are thinking this is all very well but you still do not have the time to meditate. This is an interesting paradox because if you get into the habit of setting aside time each day – even if it is only five or ten minutes for a simple meditation, the result is that your day will seem longer, you will have greater clarity of mind and will therefore get more done. Go on – try it. You know you want to!