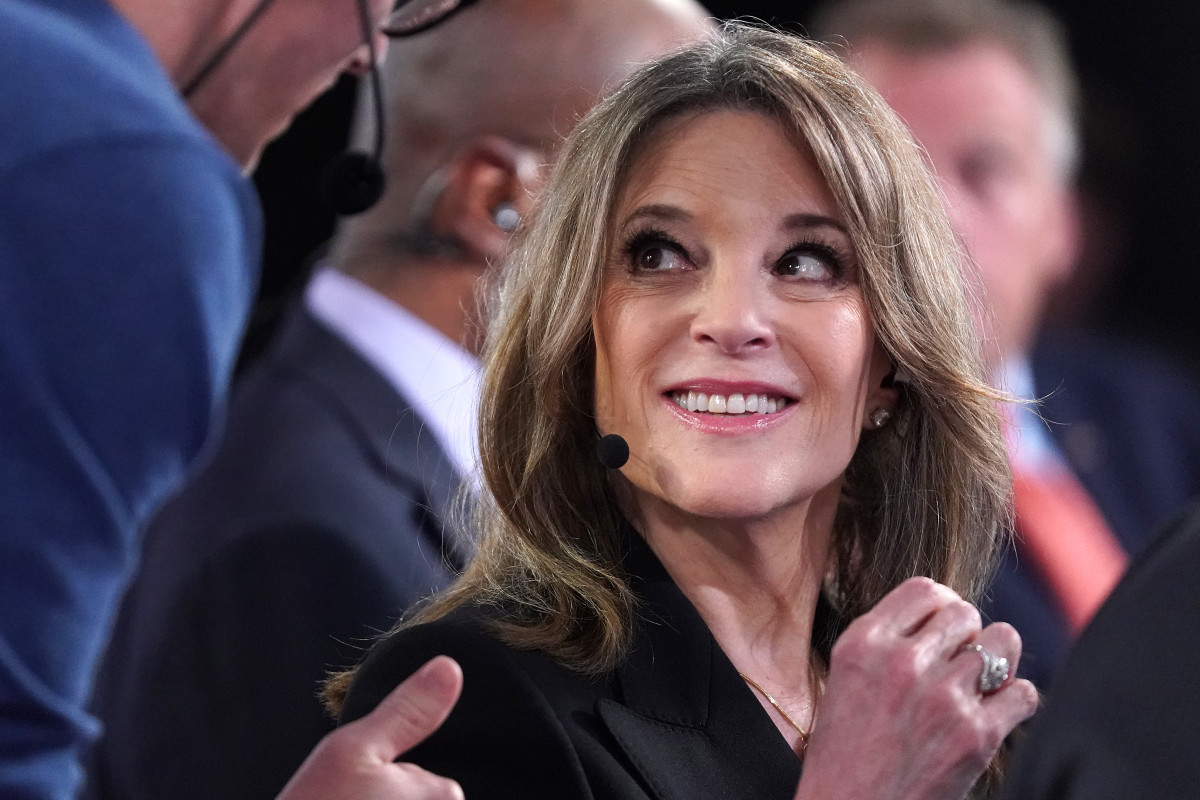 Does the name Marianne Williamson mean anything to you? If you are interested in politics (and American politics at that) it may be a name that has been on your radar recently.

She is running for President in 2020 and she has just published the book “Politics of Love”. Apparently, she was the most Googled name after the recent Presidential debates. Some praised her for talking positively instead of falling in line with the ‘dog and pony show’ that these debates generally are. Others characterised her as a ‘crazy lady’. (Really? Has New Zealand’s Jacinda not taught these people anything?) Marianne is the ANTITHESIS of Trump – and people think she’s the crazy one?

Marianne came to my attention recently because she ‘talks my language’, If you are on a spiritual path, you will know exactly what I mean … you can just ‘tell’ when you are speaking with someone who is travelling in the same lane as you. The language may be coded – but you pick up on it.

Anyway, the things she’s been saying in debate and on US talk shows have really made me pay attention. As I hinted the ‘rhetoric’ was in such contrast to what we have come to expect – in fact, she does not resort to ‘rhetoric’. She speaks with honesty and such openness and, unfortunately, that’s all still a bit woowoo for some people to take – in the political arena at least.

So back to my ‘oh wow’ moment! I have just realised I knew Marianne’s name back in 1992. I actually have one of her books!!!  “A Return to Love” … it was such a wow moment to realise her message and the way she spoke was so familiar because I had ‘met her more than two decades ago.

She ‘spoke’ to me then in just the way she speaks to me now. The thing I most loved about her book was the fact she talked about drugs, alcohol and sex in such a ‘real’ non- judgemental manner. Just because you’ve smoked a joint does not make you the Devil’s Spawn – you can still be a “spiritual” person. You see I myself had grown up having to go to Church and Sunday School until I  was 16. Combine that with a strict upbringing and you can see a whole lot of repression right there. I ended up running from anything that remotely smacked of ‘GOD’ – and yet Marianne’s book introduced a whole new notion of God while still talking about sex and drugs. In fact this was my first introduction to the notion of the more challenges you had in life – the potential to lead a spiritual life was almost hand-in-hand – because there would be no judgement and only empathy. To know ourselves – and to face others is an opportunity to know or face whatever God is to you (for me that’s Universal Source).

It seems so timely that just as I am re-visiting some deep work within myself, Marianne has come to the fore again. I support this woman’s vision (even though it remains to be seen whether I would actually agree with all of her policies). At least she is genuine. She is the real deal. I have read a few posts that suggest was/is Oprah’s Spiritual Guru too. I confess I’m not a huge Oprah fan (I’m more your Ellen kind of gal) – or else I’m sure I would have been much more familiar with Marianne’s political aspirations and current trajectory in life – but I do admire that she ‘walks her talk’.

She says you can’t be spiritual and not be political. All these things you learn as you work towards being a better version of yourself – shouldn’t stop at yourself – it’s about helping society and the plant be the best version of itself too. I think the US certainly needs to hear a refreshing voice at this time – the rest of us are sure as hell fed up listening to Trump.

In a time of loud, brash, divisive politics (which is after all simply a reflection of the people) we need to bring back compassion. Marianne’s message is not just for US citizens to ponder – it’s a message for the collective. Even within politics – what about remembering love? It’s not so crazy to believe in ‘fairness’ in politics (idealistic perhaps…).

Marianne may not win the Presidential race – but she is not as crazy as some old timers will have her tarred. She is calm, gentle and boy she is smart.

It’s time to stop thinking of spirituality and gentleness as a weakness. There is power in compassion and strength in kindness.

I am a long-time admirer of Jacinda Ardern and now Marianne has come back into my life. Let’s hear it for these women – these brave, powerful, peaceful, modern spiritual warriors. Now is the time to Return to Love.