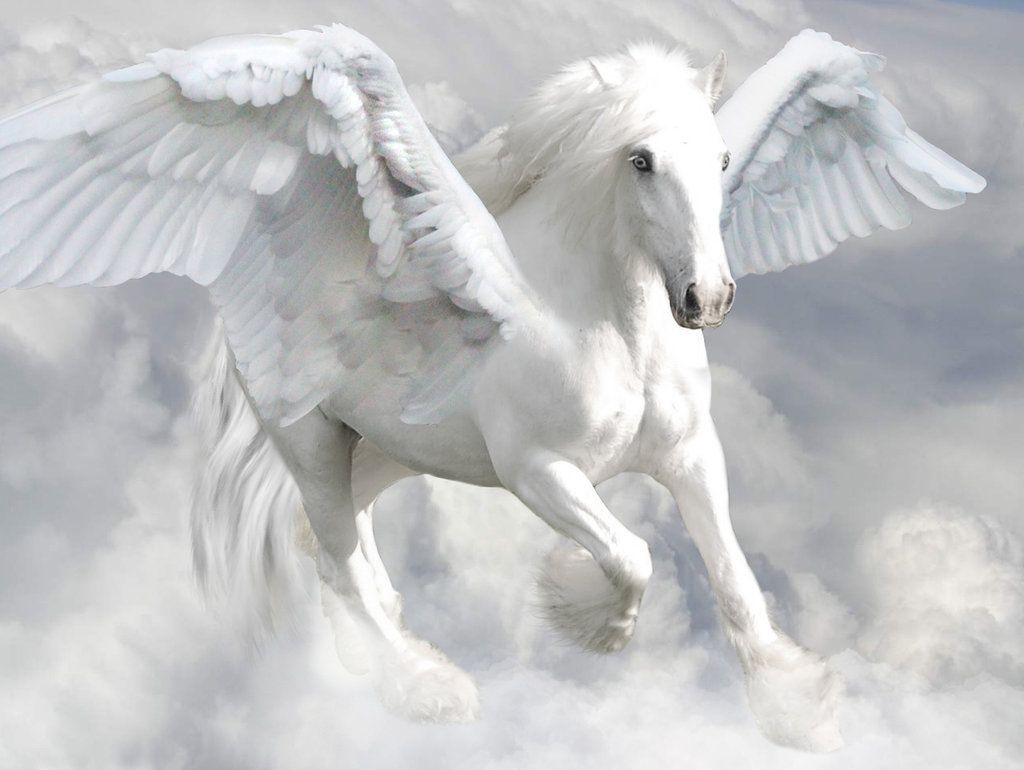 There had been a lengthy meditation process – a series of meditations actually.

The visions started as soon as I connected with the ancient mothers & grandmothers on my journey into the Akashic Records.

As I meditated in the sparkling, tingling, Akashic white light – a beautiful white horse appeared, powerfully charging towards me. Suddenly his huge angelic wings unfolded – I had never seen such beautiful, strong angelic wings before – not even in the deepest most wondrous meditations. To see them around this horse ‘my’ horse was so moving. He came toward me and nuzzled me with his head.  It seemed he was my horse, my pet – a soul I loved and adored- there was such a deep feeling of love it was almost overwhelming. We communicated easily – telepathically – as though we became one.

He was going to take me to the Great Hall. I somehow understood he would be my bridge between here and the dimensions beyond.

“What is your name? What do I call you?”  I felt I should really ‘remember’ his name but it had slipped my memory.

“You call me Tully,” he responded as though resigned to the fact he would be forever known by such a name. “Sometimes you call me Tallulah.” It was as though he mentally groaned at the humiliation of it all – but laughed at the same time. “You call me this when you are being mischievous and playful – but I do not mind. Even though my name holds far more power far more magic, far more majesty.”

I already had the sense his name commanded immense power and respect even though I was not using it. I knew I must have known his name on some level, at some point – but we were so close – so affectionate with one another – so I would tease him with other names instead.

I should point out I did not get the sense his name was Pegasus. He felt other-worldly – more of a galactic energy – though at this point in time I was fairly sure I had no idea what a galactic energy felt like.

He said again, “I really do not mind that you play with me and tease me in this way.” I also heard, ‘”We both know what I’m capable of and who I really am – there’s no need to focus on that. We are closer than that.” I felt this was a deeper reminder of knowledge I’d once held but at this point in time, could not recall.

All I ‘knew’ for sure was that I felt such a deep love – and moments later – I found myself on Tully’s back as he flew into the air. I felt like I was seven or eight year’s old and I leaned in and wrapped my arms around his neck – feeling safe and loved and so happy – playful and joyous as we soared. That sheer unbridled joy, the sense of safety and the liberation sense of freedom brought tears to my eyes.

By this point I was no longer aware of his wings though we were definitely flying. Many ‘visions’ and feelings flashed around us and through us as we soared.

There were long pillars of light all around and we seemed to be weaving through them as though they represented some sort of unseen boundary only he could navigate.  I reached out to them and felt energy rippling through me in such strong waves. I knew these were light frequencies – and I knew I could see, feel understand and hear these light frequencies. I sensed these were ‘Sentries’ as the energy and frequencies were changing as we journeyed on.

And then the scene changed – it was as if we had come up through the seabed – because in an instant I was in the sea looking – eye-line -across the waves  (as though I had emerged from below) and I could see white buildings like those I’d fallen in love with in Greece in my early 20s. Each building had a Turquoise or Blue dome-like roof … the sky was clear – but I was in the beautiful turquoise water ( I actually have a fear of deep water in this life) but this water was soothing, healing and relaxing. In my current life, now living in Australia, I still pine for Greece and Italy and have such deep connections with the crystal clear turquoise waters of the mediterranean sea. The only waters I have ever found to rival this is the waters around the Barrier Reef in Queensland.

I heard the words Atlantis in my left ear – and at that point my Ego/brain stepped in.

‘No it’s not.’ Everyone thinks they come from Atlantis. This is not Atlantis, Don’t be ridiculous’ it scolded me.

‘I ask you respectfully – please step aside. We can discuss this later … there may be something to learn here so please step down – just for now. I have work to do.’ I tried not to berate myself too much for slipping into the conscious thinking part of my brain and simply allowed myself to sink back into the vibration of the calming water around me. I was surprised at how quickly I was back in the scene, though I later realised I had never actually left the Records.

I was given the information that I was leaving this beautiful place behind (my home) – wherever this place had been I had to leave it – and I was in the water heading to a new world – a place of safety – no – more than that – I heard the words ‘safe-keeping’. I seemed able to leave without too much emotion except perhaps a longing to go back – one day.

As I dove down into the water I was shown fire. I was given more information – that I had experienced fire – and burning in fire. I had also experience water – being overwhelmed in water. I realised I was experiencing nature and ‘the elements’. So much information poured into me – I could hardly keep up.

I was shown Earth as representation of ‘nature’. I wasn’t sure if I had lived as an ‘element’ or I had lived lives to ‘experience the elements’ – Earth, Air, Water and Fire. This was important in terms of my learnings as a witch – to harness the elements/seasons/cycles – the duality of nature – the duality demonstrated in my birth sign – the duality of my citizenship status – born in the cold in the North – living in the heat of the South. Everything in my life is about experiencing and living in duality. The old Earth. My mission was to withstand the suffering of that duality – experience all sides so I might understand others – and still find my way to the New Earth – and show others the way – through/to – what is to come.

Then I was shown my name – as a child my surname was Rae – (my mother’s maiden name – long story) from McRae/MacRae. The letters RA … loomed up toward me. I understood there was significance to this so I asked for more information. I knew Ra was the Sun god of Ancient Egypt. He was also known as the Creator of Everything. I also felt ‘fire’ was significant but couldn’t quite grasp the rest of the information. Ra seemed to be related to Atlantis since I was still deep in the healing waters but I couldn’t be sure.

You have to understand, some of the information came through in snippets as though I was trying to tune in a radio station and so sometimes it was all I could to gather the words together – let alone – delve further into what they meant. Other parts of the information seem to pour or download into me.

I was told I had to ‘experience’ ‘elemental duality’ and I was then told  my fear of water was linked to my fear of finding and accepting my magic. I had hidden ‘depths’ of magic that I was yet to fathom. The truth and origins of who I truly am – are ancient.  You are one of the originals … At that point I didn’t have the presence of mind to ask one of the  ‘original whats?’ exactly.

As I mentioned previously  I seemed to be ‘watching’ Atlantis from the water – and yet I was sure I was not ‘of’ Atlantis. True my ego tried to dispel this in a conscious moment – but even in this high vibrational state I had the sense I came ‘before’ Atlantis.

‘What was before Atlantis I asked?’

There was a moments silence as though the matter was being discussed in whispers somewhere but I was not privy to the information until a few sessions later.

I was told clearly to journey on to the Great Hall. I would soon be able to access my soul truth stored in the sacred vaults.